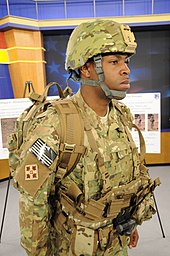 A 4th Infantry Division soldier wearing an ACH helmet in the MultiCam pattern.

The Advanced Combat Helmet was first fielded beginning in 2003 in limited numbers to eventually replace the PASGT helmet. In 2006, 102,000 helmets were ordered from ArmorSource, of which 99,000 were delivered when the contract was fulfilled and properly closed. In 2007, the Army introduced a ballistic "nape pad" that attaches to the ACH's rear suspension system. Of these, 430,000 were to be issued in the Rapid Fielding Initiative (RFI).Beginning in 2008, the Army's Program Executive Office Soldier outfitted soldiers of the 101st Airborne Division and 4th Infantry Division bound for Iraq with helmet-mounted sensors designed to gather data on head injuries (or traumatic brain injuries) caused during IED detonations. The data collected will help with the design of improvements to the ACH's suspension and chin strap systems.In May 2009, 55,000 of these were in storage and 44,000 were in use U.S. Army, Navy, and Air Force personnel. The 44,000 helmets in use by service members were recalled by the U.S. Army in May 2010 due to potentially defective materials being used. No proof of defective materials was ever established nor evidence of any wrongdoing by the contractor.[citation needed] In May 2009, 34,218 ACHs made by the Gentex Corporation were recalled. Certain screws attaching the chinstrap and other parts to the helmet did not conform to specifications in the contract. The screws failed ballistics tests at extreme temperatures. Gentex alleges its subcontractor had fabricated compliance certificates for the screws.[citation needed] A MultiCam cover for the Advanced Combat Helmet began fielding in late 2009 for soldiers deployed in Afghanistan.

On March 7, 2016, Armorsource LLC agreed to pay $3 million to settle False Claims Act allegations.Revision was awarded a contract for the ACH II contract.The ACH and Lightweight Helmets will eventually be replaced by the Enhanced Combat Helmet.

The shape of the ACH is virtually identical to the MICH TC-2000. Compared to the PASGT helmet, the front brow is eliminated to improve upwards visibility and allow easier mounting of night-vision goggle brackets. The side brim has been raised to the point that the entire lower brim of the helmet is "flat" compared to the PASGT which curves upwards at the back. This is to allow greater compatibility with communications headsets and improve hearing when headsets are not used. The ACH uses ballistic fiber such as kevlar and twaron.In 2007, the Army developed and introduced a ballistic "nape pad" that attaches to the ACH's rear suspension system and coincided with the introduction of the Improved Outer Tactical Vest (IOTV). The pad reduces soldier deaths from fragmentation wounds to the neck and lower head.

The Lightweight Advanced Combat Helmet Generation II (LW-ACH Gen II) weighs one pound less than the original ACH while offering the same ballistic protection. This is being used for the basis of the Lightweight Helmet.