The armies of major European powers introduced helmets of this type during World War I. The German Army began to replace the traditional boiled leather Pickelhaube (English: pointed headgear) with the Stahlhelm in 1916. The Stahlhelm, with its distinctive "coal scuttle" shape, was instantly recognizable and became a common element of propaganda on both sides, just like the Pickelhaube before it. The name was also used by Der Stahlhelm, a German first World War ex-servicemen's organization existing from 1918 to 1935. After World War II, the German Bundeswehr (English: Federal Armed Forces) continued to call their standard helmet Stahlhelm, but the design was based on the American M1 helmet. The Bundesgrenzschutz (English: Federal border service), however, continued to use the original German design, until both troops switched to the new M92 Aramid helmet.

At the beginning of World War I, none of the combatants were issued with any form of protection for the head other than cloth and leather caps, designed at most to protect against saber cuts. When trench warfare began, the number of casualties on all sides suffering from severe head wounds (more often caused by shrapnel bullets or shell fragments than by gunfire) increased dramatically, since the head was typically the most exposed part of the body when in a trench. The French were the first to see a need for more protection—in late 1915 they began to issue Adrian helmets to their troops.The British and Commonwealth troops followed with the Brodie helmet (a development of which was also later worn by US forces) and the Germans with the Stahlhelm.

As the German army behaved hesitantly in the development of an effective head protection, some units developed provisional helmets in 1915. Stationed in the rocky area of the Vosges the Army Detachment "Gaede" recorded significantly more head injuries caused by stone and shell splinters than did troops in other sectors of the front. The artillery workshop of the Army Detachment developed a helmet that consisted of a leather cap with a steel plate (6 mm thickness). The plate protected not only the forehead but also the eyes and nose.

The helmet was quite deep relative to the thickness of the steel; one American company that tried to press similar thickness steel into the shape of the much shallower Brodie helmet was unable to do so.The helmet had bullet resistant ability when pistol rounds like the 9mm Luger and 45 ACP could only dent the surface of it. 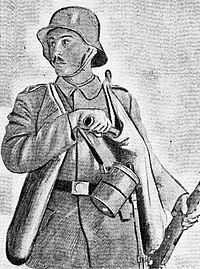 The design of the Stahlhelm was carried out by Dr. Friedrich Schwerd of the Technical Institute of Hanover. In early 1915, Schwerd had carried out a study of head wounds suffered during trench warfare and submitted a recommendation for steel helmets, shortly after which he was ordered to Berlin. Schwerd then undertook the task of designing and producing a suitable helmet, broadly based on the 15th-century sallet, which provided good protection for the head and neck.

After lengthy development work, which included testing a selection of German and Allied headgear, the first stahlhelm were tested in November 1915 at the Kummersdorf Proving Ground and then field tested by the 1st Assault Battalion. Thirty thousand examples were ordered, but it was not approved for general issue until New Year of 1916, hence it is most usually referred to as the "Model 1916". In February 1916 it was distributed to troops at Verdun, following which the incidence of serious head injuries fell dramatically. The first German troops to use this helmet were the stormtroopers of the Sturm-Bataillon Nr. 5 (Rohr), which was commanded by captain Willy Rohr.

In contrast to the Hadfield steel used in the British Brodie helmet, the Germans used a harder martensitic silicon/nickel steel. As a result, and also due to the helmet's form, the Stahlhelm had to be formed in heated dies at a greater unit cost than the British helmet, which could be formed in one piece.

Like the British and French, German troops identified highly with their helmets, as it became a popular symbol of paramilitary groups after the First World War. Such was the attachment of the World War One generation to the design that it was reportedly the reason that Hitler rejected a modernised, sloping helmet design to replace it.

Stahlhelm use in other countries

Germany exported versions of the M1935 helmet to various countries. Versions of the M1935 Stahlhelm were sent to Republic of China from 1935 to 1936 and M1935 helmet was the main helmet of the Chinese Nationalist Army during World War II. Spain also received shipments of the helmet. During the inter-war years several military missions were sent to South America under the command of Hans Kundt, after Chaco War the Bolivian army used to wear the helmet up until recently. The exported M1935 helmets were similar to the German issue, except for a different liner.

Some countries manufactured their own helmets using the M1935 design, and this basic design was in use in various nations as late as the 1970s.

The Germans allowed and assisted the Hungarians in copying their design of the M1935 steel helmet. Therefore, the WWII-produced M38 Hungarian steel helmet is nearly identical to the German M1935. Both have almost the same shape, riveted ventilation holes, and the classic rolled edge. Differences include somewhat rougher Hungarian finishing, a different liner and different rivets position - the split pins are situated behind the ventilation holes. A square metal bracket is riveted on the rear, above the back brim; used to secure the helmet to the knapsack while marching. It was typically painted in Hungarian brown-green, albeit blue-grey versions existed. It is sometimes called the "Finnish M35" due to their extensive use by the Finnish Army during the Continuation War 1941-44.

After the end of World War I Poland seized large quantities of M1918 helmets. Most of those were later sold to various countries, including Spain. However, at the end of the 1930s it was discovered that the standard Polish wz. 31 helmet was unsuitable for tank troops and motorized units; while offering decent protection, it was too large and heavy. As a stop-gap measure before a new helmet was developed, the General Staff decided to issue M1918 helmets to the 10th Motorized Cavalry Brigade, which used them during the Polish Defensive War.

During the time of the Warsaw Uprising the helmet was also worn by the members of the Polish Home Army and it was during this time that the helmet became the symbol of the resistance, as every Stahlhelm worn by a soldier of the underground army signified a dead German occupier it was taken from.

In November 1926, the Irish Defence Forces decided upon adopting the German Stahlhelm. However when the Irish government contacted German Foreign Office with a request for a sample they were informed that Germany was barred from exporting steel helmets by the Treaty of Versailles. The Irish then turned to London based Vickers, ordering 5,000 copies of a model closely resembling the M1918 helmet. The helmet remained in use until it was replaced by the British Mark II model in 1940. Following the outbreak of World War II, the helmets became the subject of anti-Irish propaganda originating in Britain. A large number of the withdrawn helmets were reissued to various emergency services after being painted white.

Switzerland used a helmet, designated the M1918, that was roughly similar to the M1916, but had a shallower, wider and more rounded crown and skirt. This was to protect against the harsh winter winds of the alpine regions.

The Chilean Army was a prolific user of the Vulkanfiber models, bought before the Second World War, along with a few M1935 and Czechoslovak M32 helmets.After the war, local production of lightweight fiber and plastic models started, which are still in ceremonial & garrison use today.Small runs of steel helmets were made by FAMAE in the 80's, but ultimately were not adopted due to the ascendance of kevlar and synthetic ballistic fiber helmets by that time.A Stahlhelm with crossed bayonets and the corresponding number is the standard insignia of infantry regiments.

The Argentine Army adopted a similar model, made of pressed fiber, during World War II, reflecting the traditional sympathy towards Germany found in many of the officers. For combat and provincial police use, imported Swiss M1918 Helmets were still in service as late as 1976.

In the Socialist Federal Republic of Yugoslavia, due to large quantities captured by World War II Partisans, the Stahlhelm was used in Yugoslav People's Army up to 1959, when it was phased out and replaced by the M59/85 steel helmet.

After World War II, West Germany's Bundesgrenzschutz border guards and some West German police units kept the Stahlhelm in their inventories (police units can be seen wearing them during footage of the Black September hostage crisis in 1972), and the Fallschirmjäger variant was used for some time by the GSG 9. With the re-armament of West Germany the Bundeswehr introduced the United States Army M1 Helmet which was replaced by a Kevlar helmet (Gefechtshelm), similar to the modern US helmets, in the 1990s. German firefighter units today still use Stahlhelm-shaped helmets in a fluorescent color.

East Germany's National People's Army M-56 helmet was modelled on an unused 1942 German design with a more conical shape.The Chilean Army still uses the Stahlhelm design for ceremonial purposes, as well as the Bolivian Army. There are also some Japanese bicycle helmets (with accompanying goggles) that resemble the Stahlhelm. Many schools and universities in Mexico such as the Autonomous University of Baja California have military bands that use or resemble the M35 Stahlhelm.

The U.S. Army's 1980s and 1990s era Kevlar Personnel Armor System for Ground Troops Helmet was sometimes called the "Fritz helmet" for its resemblance to the Stahlhelm. The U.S. Army and Marines have continued to use a design akin to the PASGT helmet with the MICH TC-2000 Combat Helmet and Lightweight Helmet, respectively.

The Chinese People's Liberation Army soldiers still used M1935 helmets which were captured from the Chinese Nationalist Army during the Chinese Civil War until the 1970s.

Since 2012, El Salvador's Policia Nacional Civil use a navy/indigo blue-coloured helmet that strongly resembles the Stahlhelm; this helmet is used by some members of the riot-control unit and rarely used by the Police's assault teams.